The vegan movement across the globe is creating awareness of the harmful implications of animal-based food on our health and the planet. Due to this people are increasingly looking for plant based alternatives of the different meats, eggs and kinds of milk. Seitan pronunciation is "say-tan". But what is seitan? What exactly is it made of and what it does? Seitan Meaning? Is it Satan? Well no!!

Seitan is a vegan meat replacer made from gluten, the main protein of wheat, giving it a name – vital wheat gluten. It was used in the sixth century as an ingredient in Chinese noodles. Referring to as "wheat gluten" initially, George Ohsawa, from Japan, in 1962 changed it to "seitan".

Restaurants in the east and southeast Asian nations serve Seitan to its vegetarian Buddhists. Next time, someone asks you about the ingredients in your mock meat and they wonder seitan? Seitan meaning, what? Then you can tell them this little history lesson as well.

You can use it for different mock meats like vegan seitan duck, or vegan seitan chicken recipes. Seitan is a highly versatile and delicious plant-based meat replacer. Wondering where to buy seitan? Well, why to buy it when you can easily make it at home? But if you still insist then you can order seitan online through this Flipkart link.

Now let's learn how to make seitan at home.

How was Seitan Protein Made Earlier?

It was traditionally made by washing wheat flour dough with water till the starch granules have dissolved.

This leaves a sticky insoluble gluten elastic mass which we cook before consuming and the best part is it doubles in size after cooking. I always prefer homemade seitan due to its affordability, amazing taste and quality control.

Making seitan at home is really easy like moving to the beats of music with just simple steps.

Saving money in the right spot and ingredient while having your superhero moment with the planet. And making package-free seitan will definitely give you the confidence to try this almost with more recipes.

How to Make Seitan?

Well, Seitan is rich in protein, gluten and minerals. It is low in carbs and fat. It’s healthy and a delicious source of plant-based protein to include in your meals. But people allergic to gluten should avoid it. Take a look at the image below for Seitan nutrition data. 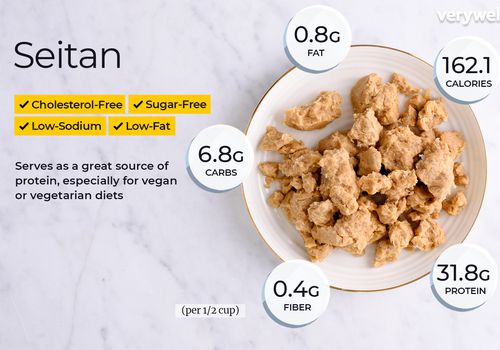 Have a Question About the Versatility of Seitan?

So you are wondering now what to do with this beautiful seitan and ways to cook it.

Yes I know I told you that the texture and flavour are similar to meat but what about cooking it like one?

Let me tell you that it is as versatile as you can imagine. Sauté it, boil it, steam it, roast it or grill it why not skewer it. Oh, wait did I mention air frying, yes you can air fry your seitan.

Go crazy and tell us about your experience we might even recreate your recipeand share it with the rest of the planet giving you the true experience of your superhero moment.